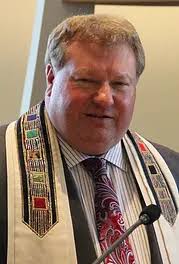 Rabbi Michael Feshbach comes to Beth Israel after having served for five years as Rabbi of the Hebrew Congregation of St. Thomas.  [His introductory letter to our congregation can be found here: Letter to Congregation Beth Israel, February 15, 2022.]

Prior to coming to the Virgin Islands, he served for sixteen years as Senior Rabbi of Temple Shalom of Chevy Chase, Maryland.  He had also served congregations in Buffalo, NY and Erie, PA, and as an assistant rabbi in Boca Raton, FL.

Rabbi Feshbach helps people find their own voice within the Jewish world.  He believes that a Jewish community should be a place for openness, for inclusiveness, welcoming Jewish families in all the varied forms in which they come today.

He is a Senior Rabbinic Fellow at the Shalom Hartman Institute of Jerusalem, Israel.  In earlier years he participated in the development of online outreach, through “Ask a Rabbi” responses for the Union for Reform Judaism, Moment Magazine, and in the early days of America Online.

He blogs at Faces in the Mirror and for The Times of Israel and Reform Judaism.org.
His personal website can be found at www.michaelfeshbach.net. Links to his numerous publications, including book chapters and articles on infertility, morality in war, inclusion and same-sex marriage, and the implications of genetic research, can be found here.

Rabbi Feshbach is married to Julie Novick. They have three children: Benjamin, Daniel and Talia.

Rabbi David M. Weis celebrated his final Shabbat as Rabbi of Beth Israel on Friday, Dec. 17, 2021, culminating 33 years of a legacy defined by his caring spiritual guidance. Going forward, he will remain part of the Beth Israel family as Rabbi Emeritus.

When Rabbi David M. Weis first came to Beth Israel in Northfield, N.J., in 1988, he brought a passion for spirituality and a desire to make a difference. During his tenure, he solidified his role as spiritual leader, not only for Beth Israel but for the greater Atlantic County region.

A lifelong learner and scholar, Rabbi Weis continued his studies each year by attending the Shalom Hartman Institute’s Rabbinic Torah Study Seminar in Israel, and has achieved the academic honor of Senior Rabbinic Fellow of the Institute. He has spoken in communities throughout the United States and has published essays and articles on a broad array of Jewish topics. He has served as an Adjunct Professor at Stockton University, a member of the Mainland Clergy Fellowship, and is Past President of the South Jersey Board of Rabbis and Cantors.

In addition to his Congregational family, Rabbi’s own children have grown up at Beth Israel. Rabbi Weis is married to noted Judaic artist and educator Susan Fischer Weis, who is the Executive Director of the Board of Jewish Education (BJE). They have three children, Joshua, Leah and Rebecca. Leah and her husband Rob have a daughter, Rina.